Back to all posts

I used the quote, "Don't let the bastards grind you down," for a reason.  It was selected from the original General from WW2 as well as from Margaret Atwoods book.  I'm speaking of the HULU Original The Handmaids Tale.

I was raised in Santa Cruz, California I had a "LOT" of feminist role models.  My stepmom, woman in town, my ex-girlfriend, the local book store (Portlandia) and the whole city was a hold out for radical thought and woman's rights.  I've read a lot of feminist books (girlfriend orders when I was 19) and probably more then most young men at the time.

So I was very happy to hear the quote in episodes 3 and 4 I think it is.  Anyways...great show!!! I predict an Emmy for Elisabeth Moss, the cinematographer and possibly music.  Its a very stylized show visually.  Check it out!  I'll explain the song at some other date, as far as its meaning to me. Bye for now. Almost 30,000 views with no advertising:)

I guess I though I'd be the only person to use "the quote" in a current art piece.  I wrote it in 2015.  Click on picture to watch the music video "Down." 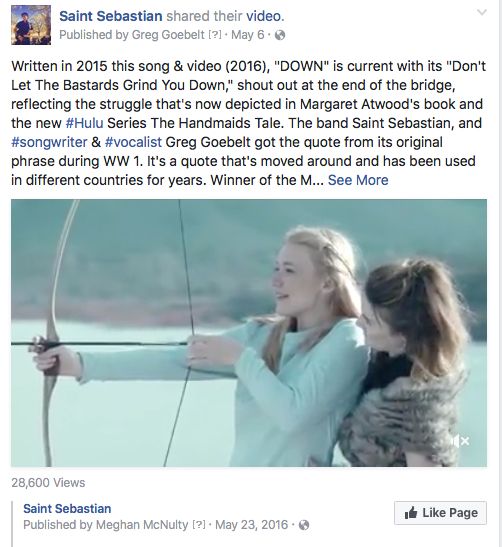